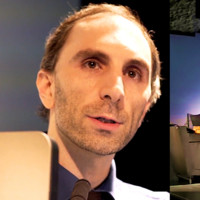 @KeithComito is a mathematician, computer programmer, and leading advocate for research aimed at extending healthy human lifespan. In addition to developing high-profile mobile applications such as HBO NOW and Disney+, he is an inventor of technologies such as that behind the GroupWatch feature of Disney+.

As president of Lifespan.io, he is a driving force towards overcoming age-related disease, participating in numerous speaking engagements around the world and working to produce high-impact media projects to inform and engage the public regarding this critical topic.

In the past he has created video games, musical applications, and biotechnology projects featured in Forbes and NPR – such as his work with the Brooklyn community lab Genspace, where he helped create games which allow players to direct the motion of microscopic organisms using galvanotaxis. Keith is also a practitioner of several martial arts, writer of music, and host of a retro video game–themed YouTube channel.

He earned a B.S. in Mathematics, B.S. in Computer science, and M.S. in Applied Mathematics at Hofstra University, where his work included analysis of the LMNA protein.

Browse all articles
No items found.